Chris Hayes to Greenwald: You Have a Way of Making Liberals ‘Hate You’
video

Chris Hayes to Greenwald: You Have a Way of Making Liberals ‘Hate You’ 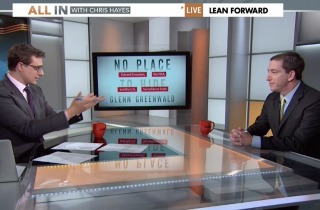 Glenn Greenwald, the journalist behind much of the critical reporting on the NSA, is considered to be a bit… well, abrasive, in some liberal circles. Greenwald’s taken shots at MSNBC before for a pro-White House bias, and on All In Friday night, MSNBC’s Chris Hayes confronted Greenwald about his confrontational style and how plenty of liberals who watch MSNBC think he’s kind of a jerk. Hayes said, “There are lots of people who watch this show who hate you, frankly.”

Greenwald expressed mock shock upon learning this, but in the next segment, Hayes got more specific, telling him, “You have a way of making people very angry with you, and you have a way––I think sometimes, if you don’t mind my saying––of alienating possible allies.”

Greenwald argued that he views it as his job to be “aggressive” and confrontational to those in power, but Hayes continued to suggest he might be attacking the Obama White House at the expense of building a coalition on these issues.

Greenwald pointed out that plenty of these liberals who hate him were cheering him on years ago because the Bush administration was the target of his criticisms. He stated, “I’d much rather have positive results and be hated by a good number of people than the other way around, being loved by everybody and fail.”