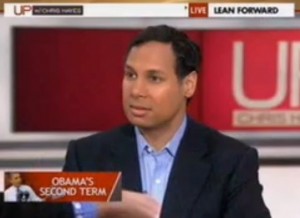 There have been a number of truly priceless reactions this political season, like Mitt Romney‘s triumphant glare at President Obama at the second presidential debate, just before moderator Candy Crowley fired her fact cannon at him. This week saw two great ones, the first of which featured Donald Trump being strangled with his own tough-on-China talk by David Letterman, and the second of which came Sunday morning, courtesy of Up with Chris Hayes host Chris Hayes. Faced with one of those “both sides” talking points that sound good to Republicans when nobody’s there to talk back, Hayes stunned Romney advisor Avik Roy with a concise, complete decimation.

In case you missed it, Rachel Maddow featured the Letterman clip on Friday night’s show, as part of an essay on Mitt Romney’s trust deficit. In the clip, prominent Romney surrogate and lunatic Birther Donald Trump tells David Letterman that he lurvs Mitt Romney because he’s so tough on China, a country that’s “ripping our heart out.”

Letterman then goes on to inspect the Donald Trump line of neckties for their country of origin, with predictable, yet still completely awesome, results. The Trump clip is right at the top of this segment, but the whole thing is worth a look, as Rachel goes on to detail the many ways Romney fails at trying to exploit businesses as backdrops, only to learn that they were all saved by President Obama:

As delicious as that was, Trump’s comeuppance was something of an anomaly, the sort of opportunity that doesn’t just present itself all the time. On Sunday morning’s Up with Chris Hayes, host Chris Hayes elicited a nearly-as-priceless reaction from Romney advisor Avik Roy, in a less flashy, but much more organic, fashion that should be part of the game films that political journalists watch in the locker room.

While discussing President Obama’s vision for a second term (along with a dead-on critique of the media’s feigned ignorance of it), Hayes brought up President Obama’s comments to The Des Moines Register about how Republicans have alienated Latino voters. He asked Avik Roy if an Obama victory would cause Republicans to reverse course, and get comprehensive immigration reform done.

“Well, George W. Bush tried to propose bipartisan immigration reform. It was sunk by the base in both parties, that had different reasons for opposing it.”

This is the kind of thing that gets said a million ties a week on political news shows, and almost always just slides through, not just in the interest of keeping things moving, but because it supports the mainstream media’s even-Steven, false balance narrative. I think it also happens because there is so much spin built into the baseline of political talk that it just becomes noise that someone is making while you wait your turn to talk. But this time, Hayes engaged the spin.

“That is just not true to say it was both parties,” Hayes cut in. “Labor, which had always historically opposed these, did the tough thing, bit down, went to their members, members that are really suspicious of this, and sold them that comprehensive immigration bill. This is McCain/Kennedy we’re talking about. It was not killed by the left base, it just wasn’t. It was killed by the right base, and the reason you know that is, in 2008, when the candidates were running, John McCain took his name off the bill. It’s not true it was killed by both parties.”

What Hayes doesn’t do, though, is go in for the kill, and make Avik Roy take back the steaming pile he just dropped. Baby steps. Roy immediately pivots to the talking point that it’s President Obama’s fault for not making Republicans less racist and xenophobic, or less in thrall to racists and xenophobes. Immigration reform didn’t happen because the President “doesn’t enjoy policy negotiations.”

Hayes again set him straight, reminding Roy and viewers of where the Republicans are on immigration, and how they got there. “Romney, we all saw him get up there and take the wood to Rick Perry in the primaries on immigration,” Hayes said. “‘You want to spend $100,000 of taxpayer money on these illegals that are coming into the country? it’s what you want to do?’ The question is, why did he do that? The answer is clear. The incentives are to use that language, beat up and get to the right of people. If those are the incentives, why are they going to be any different? When are they going to change?”

Hayes and his panel went on to challenge this false notion that Mitt Romney’s record in Massachusetts proves he’s some kind of lean, mean compromise machine. He had an 87% Democratic legislature that overrode 707 of his 844 vetoes. That’s an 84% failure rate at achieving compromise. As Hayes points out, Romney won’t have a Democratic legislature if he wins the presidency, and thus, little incentive to compromise. What he will have is a vocal base of extremists to push him around, including the guy in the on-deck circle.

Panelist Elyse Hogue nailed it when she said that the Republicans won’t wise up on immigration until they realize that “I’m running for office, for Pete’s sake” cuts both ways, and they have to choose between asking people for their papers, and asking for their votes.

But the real takeaway from this segment is that the is always enough time to unspin garbage narratives like this, and political journalists should take that time, every time. They say sunlight is the best disinfectant, but humiliating confrontation with the facts burns pretty badly, too.

Here’s the clip, from Up with Chris Hayes: