Chris Hayes Weighs In On Bain: ‘If I Can Just Be An Annoying Buzzkill Precious Liberal For A Second…’
Video

Chris Hayes Weighs In On Bain: ‘If I Can Just Be An Annoying Buzzkill Precious Liberal For A Second…’ 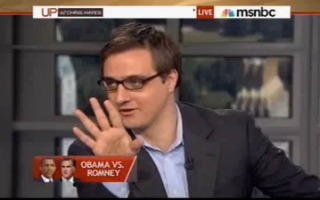 On Saturday morning’s Up With Chris Hayes, host Chris Hayes weighed in on a conversation about why issues like Mitt Romney’s Bain timeline matter by asking whether he could “be an annoying buzzkill precious liberal” for a moment. This came following a panelist’s argument that Romney’s past should matter because things like honesty and transparency should matter to the American voter.

RELATED: Mitt Romney Insists To CNN: ‘I Had No Role Whatsoever In Management Of Bain Capital After February 1999?

“I’m not psyched about this sort ‘America first’ theme that’s being what to lead with,” he said, much to guest James Carville‘s apparent amusement. He then gave his answer to the question about why Romney’s past — the timeline of his business past in particular — matters, or should matter, to voters:

Bain Capital runs a — purchases a company called GST Steel. That’s in Kansas, ok? They end up closing down that factory and shipping most of the jobs, I believe, to China around 2001, 2002, ok? The Obama campaign releases an ad hitting Mitt Romney for that, and the Romney response is “i had nothing — you can’t hit me for GST Steel because I left Bain in 1999.” So then we get the disclosure forms that he signed with the SEC saying he was the sole shareholder and chief executive officer of Bain Capital in 2000 and in 2001. These are on file with the government. He said, yes, I was, but in name only. But the whole point… What’s bizarre about this is they seem to be going through a lot of work and bending over backwards to avoid being associated with this one institution, which is GST steel, which was the subject of one ad, which the things that Bain was doing before 1999 are not in any way substantially or quantitatively different.