Chris Hayes: Where Are the Conservatives Decrying ‘Petty Tyranny’ in Ferguson? 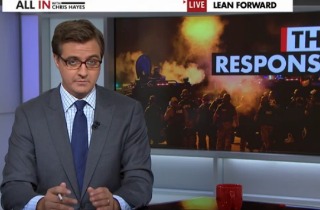 Much has been written and debated about the libertarian response to Ferguson, but MSNBC’s Chris Hayes kept the focus tonight on conservatives, and how lots of believers in small government who believe in the philosophy of “don’t tread on me” haven’t been more vocal about what’s been happening in the Missouri town reeling from Michael Brown‘s shooting. Hayes credited some on the right (Ted Cruz, Glenn Beck) for their public denunciations of police violence, but didn’t believe it was enough.

Hayes cited a video of people peacefully protesting on private property, only to get tear gas fired at them. He asked, “Can you imagine a scene more designed to inspire conservative outrage than this?”

He argued that conservatives are rather ideologically equipped to make this a cause to get behind, because of the “specific kind of indignity and infringement of liberty” that happened to Ferguson protestors.

Hayes even invoked the tea party “don’t tread on me” flag to make this argument to the right:

“When the police stop and frisk you because you fit a profile, when they make snide, abusive, or condescending comments or order you around, that is what treading looks like. That is what petty tyranny looks like for millions and millions of our fellow citizens.”

He ended by expressing hope that conservatives will stay “true to their principles” and not “stick with articulating the politics of white grievance and resentment.”