Chris Hayes: Why Has Obama Done Nothing About CIA’s Bush-Era ‘Crimes?’
video

Chris Hayes: Why Has Obama Done Nothing About CIA’s Bush-Era ‘Crimes?’ 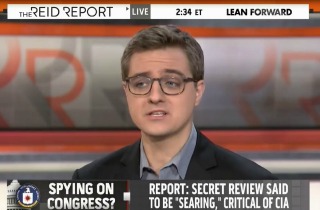 On Tuesday, members of the Senate Intelligence Committee accused the CIA of violating the law by searching through their files for details of the committee’s investigation into the CIA’s interrogation and detention practices during the George W. Bush administration. Some members suggested that the CIA was even “fearful” of what the committee might reveal to the public about those practices.

On Wednesday, MSNBC host Chris Hayes remarked that he found it shocking that two presidential election cycles have passed since Bush left office and still no one in Barack Obama’s administration has done anything to address the CIA’s “crimes” of that period.

“No one was ever held accountable for the fact that the United States tortured people for a period of time,” Hayes told MSNBC host Joy-Ann Reid. “And here’s what’s even more galling — not only was no one held accountable, we had an election in which this was a huge issue.

RELATED: Ron Wyden: CIA ‘Fearful’ of Report on Bush-Era Practices Being Made Public

“A new executive was elect elected, another election, five years later, the agency that committed that torture – not at their own directive, the directive of above — still believes what they did was effective,” Hayes continued. “Still is unwilling to accept the fact that these were crimes.”

“That’s what’s crazy,” he added. “We’re having this discussion 2014. this should have been litigated long ago.”

Reid noted that “there’s been no accountability” over the course of the Obama administration for the CIA’s actions in the last decade. Hayes said that action against the CIA will depends on whether the Senate Intelligence Committee’s report is ever released to the public.

“If we learn things from that report that shock the conscience, we might have another round of this,” Hayes opined. “We never had the first round in certain ways, and that’s the problem.”