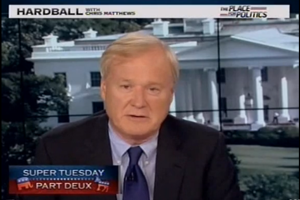 To most Americans who follow politics, Nikki Haley is a South Carolina politician who may or may not have had an inappropriate relationship with a number of people in South Carolina, one of whom Jon Stewart thinks is gay. But despite her relative obscurity, a victory for Haley, suggested MSNBC’s Chris Matthews, could have the power to put another woman one step closer to the White House– Sarah Palin.

Chatting about the peculiar situation in South Carolina (at press time, both alleged lover Larry Marchant and his former boss, Lt. Governor André Bauer, for some reason, have taken polygraph tests), Matthews almost called it “the dirtiest thing in politics,” but, barring that, at least “warped.” Talking to the Washington Post‘s Kathleen Parker, he wondered whether the more primary victories Palin collects– another controversial endorsement, that of California’s Carly Fiorina, is on the gubernatorial ballot today, too–the more credible of a 2012 presidential candidate she becomes. While Parker admits she did not expect Palin to run for any position because of her success as a media personality, she agreed there was something to Matthews’ theory, that Palin is “putting together the pieces of the claim that, although she may not know more than other candidates, she’s much more credible as a beater of Barack Obama because she has won all these races.”

Well, with more than half of precincts reporting, Haley has a 20 point lead, so as long as she can keep a sizable number of the other half of voters, her dream– and, perhaps, Palin’s– is still alive. Video from today’s Hardball below: