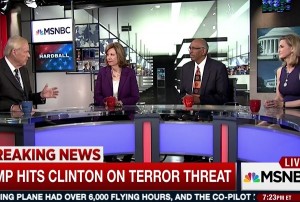 If you were frightened by the prospect of a President Donald Trump tweeting off the top of his head as world events unfold, then you should be even more terrified by a political news media that doesn’t have a clue why that is dangerous. It’s bad enough that some of them pick the wrong reason to be disturbed by Trump’s early-morning tweet about the missing EgyptAir Airbus, but on Thursday night’s Hardball, host Chris Matthews and his panel of political media experts actually praised the move, saying Trump’s “intuition” should be “valued,” and that the early assessment was a sign that Trump is a “strong leader.”

While Matthews has already amply demonstrated the thrill that Trump sends up his leg, the other panelists, with the exception of former RNC Chairman Michael Steele, are ostensibly objective political journalists, which makes their detached ignorance of Trump’s recklessness that much more terrifying. Matthews begins the panel by twice suggesting that Trump has “intuition” that “should be valued,” and while he briefly wonders if the tweet might constitute “irresponsibility,” that possibility is completely abandoned.

Instead, USA Today‘s Susan Page suggested that the tweet showed that Trump “has the guts to just say it out loud without any hesitation,” and that “it reinforces that he is such a strong leader that he can make declarations without any actual information.”

The Washington Post‘s Anne Gearan, meanwhile, claimed that even if Donald Trump turns out to have been wrong, it won’t hurt him:

Gearan: I don’t think it would have redounded that badly on him that much if it still turns out to be wrong, because…

Matthews: We go to the other way and somebody said it was not terrorism, and it turned out to be terrorism, they would look the fool.

Gearan: Exactly, he is doing exactly what he has been doing all along and profited by every turn.

Well, of course it’s not going to hurt him if the press that’s supposed to be serving the public sits around and praises him for it!

The problem is that people like Matthews, Gearan, and Page don’t see themselves as praising Trump, they think they’re just observing the state of play, but it is their job to tell people why a president issuing declarations with no factual basis might not actually be a good thing. If you don’t do that, if all you do is “observe” that “people” will love it, then you are praising Trump. Gearan’s assertion that this won’t hurt Trump no matter what is an explicit surrender of her duty to hold politicians accountable, and she’s not alone.

This is not a television show, and our political media needs to stop acting like their only job is to pass the Jiffy Pop and make wisecracks at the screen.