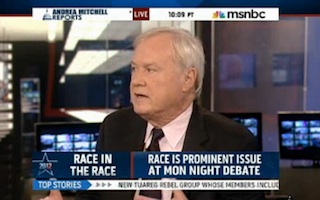 A big moment of last night’s debate came when moderator Juan Williams and Newt Gingrich argued over Gingrich’s comments that many have seen as condescending towards blacks. However, Williams really should have been offended due to Gingrich’s incredibly insensitive pronunciation of the word “Juan.” At least, that’s the opinion of Chris Matthews who accused Gingrich of a racial motive in the way he used Williams’ name.

Matthews’ comments came during an appearance on Andrea Mitchell Reports in which he and Mitchell discussed the tone in yesterday’s all white audience. Matthews accused Rick Perry of using terms bordering on “succession” when he talked about the South Carolina people’s “war” with the government. However, the focus was on Gingrich and Williams and particularly Williams’ first name. While Matthews agreed with a lot of what Gingrich said, he argued that this was a coded message to the crowd.

“That use of the name ‘Juan,’ the way he did it. You can’t argue these things. You either see them or you don’t. It’s just the way he did that. I sensed a little applause when he said ‘Let me help you’ when he answered the Juan question. It’s in the eye of the beholder. And, by the way, calling someone a racist is the worst way to get them to stop being racist because everyone gets defensive. … So it’s stupid to say it but, honestly, if you notice it, you sort of ought to blow the whistle. Because there is a dog whistle going on here.”

Matthews isn’t the only one accusing Gingrich of being condescending to WIlliams. Meanwhile, the Right is accusing Williams of race baiting Gingrich.

And so the Circle of Anger continues spinning, forever onward.