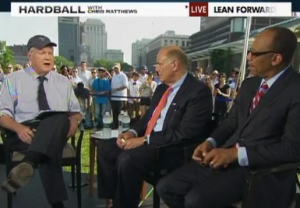 Chris Matthews saw the newly released alleged photo of Congressman Anthony Weiner‘s private parts and was flabbergasted that a politician could be so foolish to have sent out such a picture. Given the graphic nature of the photo, and its inability to be displayed on television, Matthews eloquently provided this description of the picture: “use your worst imagination about what the picture looks like.”

Matthews asked Ed Rendell and Eugene Robinson, whether in light of this new photo, could Weiner’s political career actually survive? Rendell said as recently as yesterday that he hoped Weiner would not quit, since he was such a passionate and articulate defender of liberal causes, but today Rendell changed his mind, and later compared Weiner to a crack cocaine addict who needed help and needed to resign. Robinson was confident Weiner has no political future, and said all of his behavior suggested a “cry for help.” Matthews still had lingering questions though about Weiner’s mental state:

“Is this the behavior of a person who has his head screwed on? . . . It seems like a person who is not just a risk-taker but is compelled to almost put his career at risk . . . he’s sending out damaging material to people he doesn’t even know . . . and this material, if it’s distributed to anyone else, would kill his career . . . is this suicidal?”

With the mounting embarrassment, and with his former supporters bailing from defending him as quickly as possible, might a Weiner resignation soon be on the horizon?