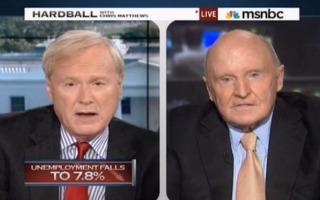 Former General Electric CEO Jack Welch appeared on Hardball with Chris Matthews on Friday to defend his assertion that the Bureau of Labor Statistics survey which surge in employment forcing the unemployment metric down from 8.1 percent to 7.8 percent is flawed. The interview between Matthews and Welch quickly descended into a heated debate over the veracity of the BLS figures and the charge that there was a corrupt effort to rig the unemployment rate to help President Barack Obama win reelection.

“We had 600,000 government jobs added in the last two months,” said Welch. “We had 873,00 jobs by a household survey – which is a total estimate – from 50,000 phone calls. Of those, 600,000 were temporary workers. Chris, these numbers are all a series of assumptions. Tons of assumptions. And it just seems somewhat coincidental that a month before the election, the numbers go one tenth of a point below where the president started. Although, I don’t see anything in the economy that says these surges are true.”

Matthews said that “it must be embarrassing” for Welch to be tweeting given the power he formally held as GE chairman. He asked if he had any evidence to back up his claim that the BLS numbers were flawed. “I have no evidence to prove that, I just raise the question,” said Welch.

“But you didn’t ask the question,” Matthews replied. “Did you talk to any economist or any people in the national income accounting world that understand how these numbers are put together before you accuse these ‘Chicago guys’ of changing the numbers?”

“I know that these numbers are gathered by a series of wild assumptions,” said Welch. He said that it was odd that Obama did not mention that 600,000 new jobs were created in the public sector in the last two months.

“It’s not your attitude about Obama people care about, it’s your analysis,” Matthews fired back. He accused Welch of making a claim that he could not support. “Do you want to take back?”

“No,” Welch replied. When Matthews asserted that Welch was alleging corruption in the federal movement, Welch laughed.

“it’s not funny, Jack,” Matthews said. “You’re talking about the President of the United States playing with the Bureau of Labor Statistics’ numbers. This is Nixon stuff.”

“Jack, do you want to take back the charge that there was corruption here,” Matthews asked. Welch stood by the charge.

“They’ve been calling Mitt Romney a liar – a falsehood – for the last 48 hours after the debate,” Welch replied. He claimed that he had predicted that the unemployment figure would be below 8 percent one month before the election in order to help Obama win reelection.

“I’ve reviewed 14 businesses this week,” said Welch. “I’ve seen everybody with a third quarter equal to or weaker than the first quarter. In order to get 873,000 new jobs, you would have to have a GDP going at 4 to 5 percent. The second quarter was downgraded from 1.7 to 1.3. The third quarter is not going to be very strong. It just defies the imagination to have a surge larger than any surge since 1983 a month before the election. I leave it to you to do all the analysis.”

“Do you believe the BLS, the Bureau of Labor Statistics, lacks integrity,” Matthews asked.

“These numbers defy logic,” Welch said. “On the face of it, we don’t have this GDP. I love you, but you can’t get there.”

Matthews asked finally if Welch would assert that this is a coincidence and he was not alleging corruption in the BLS or the executive branch. Welch refused to do that. “I’m just raising the question for some good analysts to go look at,” he concluded.