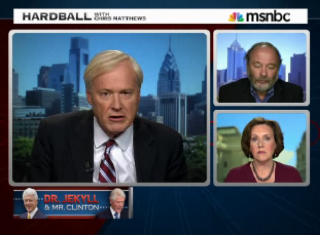 Bill Clinton started off the week by saying something favorable about lowering taxes, which is now considered a Major Gaffe™ that somehow revives Hillary 2016 if one is to go by some headlines. But on Hardball today, Chris Matthews, Joan Walsh and Joe Klein wanted to make abundantly clear that they didn’t think President Clinton was hurting the Obama campaign, and kept coming up with new ways to praise the life and times of Bill Clinton.

RELATED: Bill Clinton On Romney Praise: ‘I Didn’t Have Any Idea … I Was Wading Into Controversy’

“I think we would both agree that President Clinton is a net gain for President Obama,” Walsh explained, attacking the “brazen Republicans” who “are trying to act like they loved Bill Clinton in the 90s when, in fact, at the time they savaged him, they impeached him.” Matthews replied by defending his disagreements with President Obama: “he’s not Clarence Thomas imitating Scalia, he doesn’t have to be a synchronized swimmer with the President!”

Klein tried to defend President Clinton’s personality, and not just his statements, saying that blue collar workers loved Clinton because “he was living the dream! He was dating lounge singers and going to McDonald’s.” He was cut short by Matthews going off on Republicans who claim they now agree with Clinton and their “pants-on-fire dishonesty.” “Who writes this crap?” Matthews asked, deciding to blame “some dinky staff member wrote this for them based on some dinky report.” Walsh agreed this was politically wrong, but turned the conversation back to how great Clinton is, and Matthews agreed, talking about how Clinton’s family, as well as President Obama’s, was very poor. Klein wrapped up with an impassioned defense of Clinton’s eloquence, adding, “the most important thing here is that I think the folks realize that this is a serious, serious situation for our country, [and] talking points the way Republicans do them is an insult to their intelligence.”