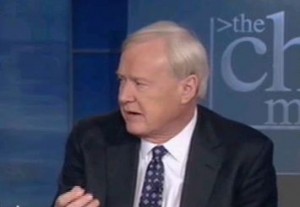 On his show today, Chris Matthews continued the national media discussion on the death of Florida teenager Trayvon Martin. He noted that in stark contrast to the unity and hopefulness surrounding President Obama‘s inauguration, the protests over Martin’s death illustrate that people “still react with the full force of our shared history” in such times of tragedy. Matthews brought up the president’s own experiences and public thoughts on what it means to be a black man in modern America.

In 2007, Obama spoke of moving beyond racial divisions, and Matthews said moments like those were when Obama hits an oratorical peak. But regarding the Martin case, Nia-Malika Henderson said that in all corners, there has been “a rush to judgment” that has not served to shine further light onto what actually happened. She noted that Obama has been careful in the way he talks publicly about the case, and many African-Americans don’t see the president as someone who needs to wade into issues of race every time they pop up in this country. And in contrast to the mild controversies that bubbled over his remarks during the cases of Professor Henry Louis Gates and Shirley Sherrod, the president’s comments were more tempered this time around.

Kathleen Parker, despite writing in her column that Obama’s words may have drawn the conversation towards the notion of racially motivated murder when that might not exactly be the case, did admit she has a natural curiosity to know what the nation’s first African-American president has to say about these issues. However, she also agreed with Henderson that there was a big rush to judgment in this case. Dan Rather said it may be wise for Obama to not say anything further until new evidence comes to light in the case.

Rather also suggested that when it comes to issues of race in this country, there is a fundamental “decency” among the American people when discussing this issue. Parker said that more people in the media should be taking this into account rather than being so gung-ho on trying to make Zimmerman guilty before charges are brought.