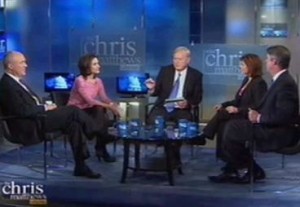 “It’s panic time among Republican leaders.” That’s how Chris Matthews opened a segment of his show today, looking at the topsy-turvy Alice-in-Wonderland world that has arisen from the Republican party’s contest to choose a presidential nominee. Whether it’s Mitt Romney‘s staggering inability to connect with voters or Rick Santorum‘s staggering ability to make the establishment uncomfortable, there’s pretty much no rhyme or reason to this thing anymore.

NBC correspondent Kelly O’Donnell said that while Santorum’s views on social issues are helping him out well in the primaries, “it’s not good politics” to dwell on those issues in a time where people are concerned about the economy. Major Garrett agreed that Santorum’s views are “out of step with most Americans, and predicted this might end up driving away some female voters from the Republican party.

Time‘s Michael Duffy countered by saying in order to fix their house, Republicans are “burning down their own garage.” Liz Marlantes predicted nothing short of a “panic” if Romney loses Michigan, especially factoring in how confident Romney has been in saying he will win the state.

Matthews reminded us that the Romney family name is almost synonymous with Michigan, and it woud be devastating if Romney lost it. But Matthews also pointed to some awkward moments Romney has had on the campaign trail.

“He says things that are very strange, like ‘severely’ conservative. And the trees are the right height.”

RELATED: Bill Maher: Romney Can’t Run To Santorum’s Right, Only People There Are ‘Kirk Cameron And The Neo-Nazi Party’

The panel agreed that while Romney has been mostly a strong candidate, it’s been hard for him to adapt and show and kind of personal connection with voters.