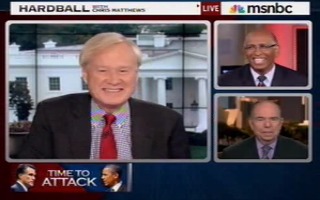 On Tuesday’s Hardball, Chris Matthews and his panel guests took on President Barack Obama’s reelection campaign’s latest ad featuring Sesame Street’s Big Bird. The Obama campaign’s ad hits Mitt Romney for his pledge to discontinue federal subsidies for PBS, but ignoring the threats to America’s economy posed by unscrupulous traders on Wall Street. Matthews and his panel panned the new ad and said that it was not an effective closing argument heading into the final weeks of the campaign.

“You would think the Obama campaign would want to start looking forward toward the V.P. debate and the two remaining presidential debates,” Matthews said. “Today, the Obama camp released this ad, again going back to Romney’s line in the debate about Big Bird.”

Matthews begged his guests to be “independent minded” for a moment while they revealed whether they thought this ad was the right way to frame the election in its final four weeks.

Matthews said that there is a way to use sarcasm and parody to level an effective critique, but this ad did not showcase that kind of witty criticism.