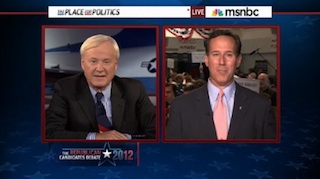 Well, here’s a vaguely uncomfortable clip. When you begin an interview with a candidate in a presidential race by basically saying they’re out of the race, things are already going to be weird. When you then spend the next couple of minutes repeatedly asking why they didn’t say anything in a debate when they clearly wanted to say something and are ticked off they didn’t get a chance, things will get even weirder. And that’s just what happened when Chris Matthews did a post-debate interview with Rick Santorum last night.

Right away, Matthews pointed out that the race was between Rick Perry and Mitt Romney. It’s an arguable point, but you’ve still got to feel for Santorum a bit as he, with a smile plastered on his face, attempted to vouch for this other guy. You may have heard of him? He’s called “Rick Santorum.”

(By the way, Rick, if speaking in the third person didn’t work for Bob Dole, it’s not going to work for you.)

But the whole thing got more and more uncomfortable as Matthews kept asking why Santorum didn’t talk about this or that while the candidate, clearly getting annoyed, explained that, if “your network” had asked him more questions, maybe he would have, thank you very much.

We did learn one tidbit right at the end (literally). Santorum apparently believes in evolution in a “micro sense.” Maybe I’d have any idea what on earth that means if he actually got some time to talk about it.