Chris Matthews Seeks A Republican Who Disagrees With Rush Limbaugh 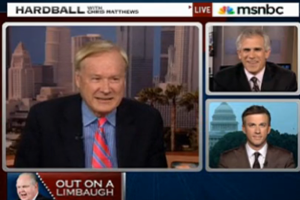 Chris Matthews is in awe of how much influence Rush Limbaugh has on the Republican Party. From Michael Steele to John Boehner, Matthews has been searching far and wide for a Republican who will disagree with the talk radio titan on anything from Barack Obama‘s monarchist tendencies to the claim that Times Square bomber Faisel Shahzad is a registered Democrat. He found one in former New York government George Pataki, but flanked by Media Matters President Eric Burns and David Corn of Mother Jones, he’s launching a campaign to drag them all out of the woodwork.

Burns repeated his theory that the Republican Party is just a wing of a vast Fox News/Rush Limbaugh-controlled conspiracy, with Corn corroborating that, but what spoke out the most in the segment was a small compilation of recent statements by the man himself, claiming that Shahzad is a Democrat; that white males are oppressed; that the Obama “regime”* is “not of this country,” etc.

Showing this “Rush Limbaugh Greatest Hits” package, Matthews called Limbaugh a genius and challenged any and all Republicans that do not agree with Limbaugh to come on the show– “we’ll give you a full platform, of course you’ve got to be careful what he does to you.”

*Note to both Matthews and Limbaugh: A state is a bureaucratic authority (ie the post office or the OMB). A regime is a government system (ie a theocracy or representative democracy). A government is the group of people put into power by the regime (ie Obama administration or Bush administration). There is no such thing as “regime change” in America unless the Constitution is significantly altered such that the transfer of power is different. Until the institutions of Congress, the Courts, and the White House are changed, there will be no regime change in America.