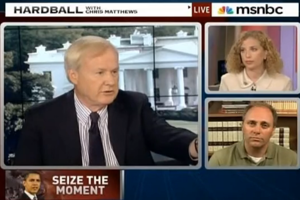 Chris Matthews is no friend to oil corporations. On last night’s Hardball, Matthews bashed the extreme free market ideology– and Republicans in particular– for its disapproval of heavy government oversight on oil companies. To emphasize his point, he compared the oil disaster to the sinking of the Titanic, arguing that Republicans would not have wanted government regulators to add lifeboats to the ship if its owners opposed the measure.

The Titanic argument came up while talking to Louisiana Republican Congressman Steve Scalise, who was upset at the government for not helping out enough while continuing to attempt regulation that, he argued, did not work in the past. Matthews unloaded on him, suggesting that Republicans cared more for the well-being of corporations than the safety of customers:

“If the Titanic sank today, you know what the Republicans would be saying? ‘Don’t be telling the shipping lines they need more life rafts or life preservers. Don’t get involved with industry telling them what to do.’ At some point the government has to intervene because the private sector is not doing the job. The private section is what we’re seeing on that live blog every night on television. By the way, Congressman, that is the work of the private sector without regulation. That’s what it looks like.”

Scalise sat quietly until he finished, the quipped, “If the Titanic sank today, I’m sure the President would try to blame it on George Bush, and we’ve seen where that’s gotten us,” a comment Matthews designated as “not useful.”

Video from last night’s Hardball below: