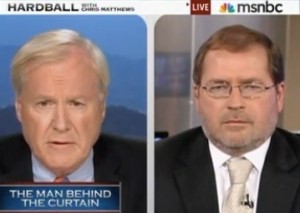 Chris Matthews hyped his interview with the President of Americans for Tax Reform, Grover Norquist and wasn’t shy about suggesting that Norquist was the “man behind the curtain” who could be most responsible for preventing Republicans from agreeing to a deficit compromise. The interview didn’t disappoint, delivering plenty of fireworks, with the most exciting moment coming from Matthews yelling at Norquist to elaborate on what exactly he meant when he used the term “hissy fit” to describe President Obama’s behavior?

The lengthy discussion found Matthews and Norquist repeating many of their same points, yet neither seemed convinced by anything said by the other. Norquist was proud his Taxpayer Protection Pledge was signed by 235 members of House and 41 Senators, yet Matthews repeatedly asked “why are you pushing so hard” to keep these politicians to a pledge that could result in the country going into default? Norquist insisted that the “power of the pledge is the power of the American people” and that it ultimately means nothing if it’s not enforced at all times, regardless of the circumstances. Yet this was the most entertaining exchange:

Norquist: “I don’t think the President of the United States is such a left-wing idealogue that he would close down the government because he’s having a hissy fit that he can’t get a tax increase.”
Matthews: “A hissy fit, is that how we talk now? A hissy fit, what’s that?”

Matthews seemed genuinely interested in learning the definition of what a “hissy fit” meant, yet Norquist perhaps smartly pivoted to explain that politicians should “grow the economy and cut spending” to raise revenue rather than think about raising taxes. Later Norquist tried to answer a question and asked “do I get to talk,” yet Matthews humorously responded “no, you’ve been talking quite well.” In the end Matthews didn’t get his definition of a “hissy fit” but still concluded about Norquist “you’ve got all the arguments except the logic.”