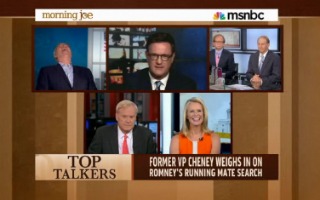 MSNBC’s Chris Matthews stopped by Morning Joe Monday, where he weighed in on a wide variety of campaign issues… and, in the process, was forced to contend with his colleague Joe Scarborough‘s teasing.

On the matter of Bill Clinton‘s increased visibility and role in the upcoming DNC, Matthews said that the man has a positive legacy, politically speaking, adding that “the Republicans, even, are selling his story, which is the 90s were great, Clinton was great.” He and Scarborough also discussed criticism that Clinton had previously been “playing the race card,” with Matthews adding that there had been a lot of emphasis on race in the last election, particularly during the South Carolina primaries, with “old-timey” buttons showing black voters in the South that Obama was, indeed, a black candidate.

Later, Scarborough teased an annoyed Matthews over his pronunciation of “Cheney,” adding that he could say the name however he wanted. Panelist Mike Barnicle, in particular, seemed to get a big kick out of the moment.

Matthews (who called the former Vice President a “mistake”), said Cheney (correctly pronounced “Cheeney,” he insisted) “is a problem. I think he’s pretty much hated in this country. People really don’t like him. I can’t believe they’re going to show him at the convention.”

On the topic of Mitt Romney‘s possible running mate, Matthews said he’d do well to select a Protestant “every guy,” sort of like Ed McMahon was to Johnny Carson.