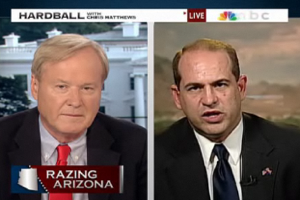 The partial rejection of the Arizona immigration law today by a federal judge shifted the gears of the news cycle significantly today. On Hardball tonight, Chris Matthews invited two Arizona legislators to debate the pros and cons of the law. Democratic Rep. Raul Grijalva finished the segment as Matthews’ designated “serious” person, while Republican state Rep. Rick Murphy was branded a “BS artist” for his opposition to the national ID card.

Rep. Grijalva opposed the entire law, but was happy with what he viewed as progress in the ruling today, while Rep. Murphy supported the law but was not overwhelming upset with the ruling. He argued that the ruling today against parts of the law was to be expected, and that “it’s actually surprising that it wasn’t going to go any further and strike the whole thing down.”

Matthews reacted somewhat aggressively to this point, calling him a “politician” for using terms like “bureaucrat,” though it wasn’t until he asked Murphy about the possibility of national ID cards that Matthews lost his patience with him. Asking both representatives the question, Grijalva supported the idea and Murphy opposed it. The latter received a rephrased version of the question: “Do you want a reliable system where an employer knows whether they are breaking the law or not, or are we all going to BS this system and enjoy the fight?” On the second negative answer on the national IDs, Matthews calls Murphy “one of the BS artists of this world” and, later, “a hopeless right-winger” and determines that he is “not serious.”

The full debate below: