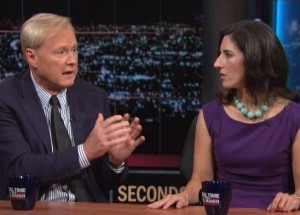 On his show Friday, HBO’s Bill Maher discussed Newsweek‘s controversy-courting “Muslim Rage” cover, saying that people on the left look at the cover image and know that it doesn’t reflect all Muslims.

But, he continued, “most Muslims — at least half of them, I think, around the world — think it is ok to kill someone if they insult the Prophet. And that is a big problem. That is a clash of civilizations.”

Panelist Chris Matthews thought that Maher’s assertion reflected, in a way, what Osama bin Laden‘s goal had been — to turn, say, the U.S. against Islam (rather than simply against him and terrorist groups like Al-Qaeda) and promote a clash between two different, opposing civilizations.

Time‘s Rana Foroohar, meanwhile, felt the answer was for the U.S. to become more proactive when it comes to our foreign policy.

“Have you ever lived in the Mid East?” Matthews asked Maher.

“Of course not,” Maher replied as the audience broke into laughter. “What kind of a question is that? Have I ever lived in the… I’d be dead if I lived in the Middle East.”

Matthews remained serious, telling Maher he’d lived in Jerusalem for a month and returned recently and said that he experienced both devout Jews and Muslims going about their prayers and traditions, intermingling peacefully. “We can live together with different religious beliefs,” he concluded.

Maher saw things differently. “Not really,” he said. “Right below the surface, they both believe something that’s incompatible with the other.”

“Well, what’s your solution?” asked Matthews, voice rising. “You don’t want any of it.”

“Exactly!” said Maher. “That is the solution.”

“That’s not the solution for them,” Matthews insisted as the audience clapped for Maher’s response.

Author Salman Rushdie cautioned the panel to remember that there are political factors at play behind the displays of “rage” in North Africa and the Middle East — something Maher essentially agreed with, but noted that such political leadership wouldn’t exist without fundamentalist Islam.

“This is why we have to keep Kate Middleton’s tits in the news,” said Maher, because it shows that, in the “West,” government doesn’t sanction or promote everything that appears in the news. Matthews, for one, heartily agreed.

And, once again, areolas bring us all together.

Have a look, via HBO: