Chris Matthews Considers Bachmann, Gingrich, Trump To Be The ‘Zealots At Home’ 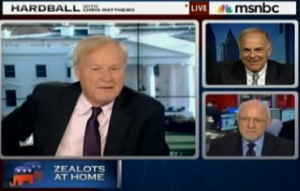 Chris Matthews wanted to discuss the serious issue of “zealots at home” in the Republican party who continue to allege that President Obama might not really be an American. Former Democratic Governor Ed Rendell and Republican strategist Ed Rollins joined Matthews and were ready to play Hardball. However, by the end of the discussion, Matthews couldn’t stop himself from loudly chuckling, which culminated in a bizarre debate about why Republicans want to hold their 2012 national convention in Florida where they will have to deal with the “schvitz factor.”

Matthews affectionately described Rollins as “one of the smart people on that side” before disagreeing with most of his analysis. On the issue of whether Mike Huckabee believes the “crapolla” that Obama might not truly be an American, Rollins repeated “no” several times, while Matthews humorously repeated “yes” just as many times. Given that Rollins is normally a CNN political contributor, he replied “I have waited three years to get back on your show . . . and I would just like to get a word in here.”

Meanwhile, Rendell claimed Republicans overreached with “crap like the birther stuff” and because of that, the Democratic party has been united behind Obama. Rendell also argued that the “Tea Party spewing out their hate” will ultimately scare away independents. Yet Rollins tried to convince both Matthews and Rendell that the election will not be about birth certificates, but instead will be about unemployment and “making tough choices this President has a total inability to make.”

Matthews randomly concluded by not understanding why Republicans wanted to have their convention in such hot climate. Matthews predicted that the Tea Party people will not be happy being there if Tim Pawlenty is the nominee and warned Rollins, in between laughter, that “the craziest of those people will be the hottest.”