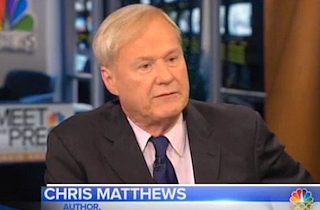 MSNBC Hardball host Chris Matthews appeared on Meet the Press Sunday morning and diagnosed the problem with the troubled Affordable Care Act implementation as President Barack Obama’s inability to delegate authority, depriving any one person of responsibility for the website rollout.

“This president doesn’t have a chain of command—a very clear line of authority, and unique responsibility,” Matthews said. “I remember [Kathleen] Sebelius…when she was asked who’s in charge of that committee, under oath, she started talking about someone the head of CMS, who handles Medicare and Medicaid. Among thirty or forty other responsibilities, this person had the rollout responsibilities.”

“You put somebody in charge and they’re uniquely responsible for its success or failure,” Matthews continued. “Obama doesn’t do things that way. He’s got floaters, like Valerie Jarrett floating around; he doesn’t want to have a real chief of staff, like a Jim Baker. He doesn’t want to give authority to people, and I think it’s been a real problem.”

“I would think,” Tom Brokaw added, “given the importance of Obamacare,eight months ago the president would have started every meeting with: ‘How are we doing? Is that going to be ready? That’s going to be our big play for the second term.’ And demanding Kathleen Sebelius, and other people who were involved in it, that they were ready. That it suddenly landed in the way that it did, in utter chaos, is inexplicable.”