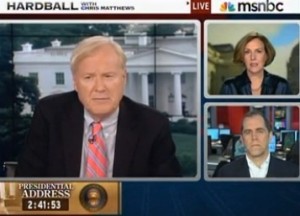 Chris Matthews was somewhat surprised with Al Gore’s harsh critique of President Obama in Rolling Stone regarding his inaction on climate policy. Instead Matthews argued that even if Obama has not been perfect, Gore should really be angry at the “corrupt media on the right” who refuse to believe in climate change, not because they are stupid, but because in Matthews’ opinion they are “evil.”

Joan Walsh told Matthews she found Gore’s essay both inspiring and depressing. And even if Gore was critical of the media, Walsh comforted Matthews that Gore wasn’t talking about them “of course, because we’re doing the right thing.” Forget about worrying about global warming though, since it was Matthews who was continuing to heat up with anger at conservatives throughout this segment.

Matthews argued that the Republican party is lining itself up as “anti-science” and selling half the country “nonsense.” He singled out Rush Limbaugh, Glenn Beck, the Wall Street Journal editorial page and the Chamber of Commerce as being guilty of pandering to business interests and declared “these people are evil in what they are doing.” Especially since Matthews doesn’t believe Beck or Limbaugh are stupid, he thinks their motives are not well-intentioned. And in a quote that will surely get some of Matthews’ own critics excited, he admits that on certain issues like climate, he really hates “so called objective journalism” where “even-handedness” forces reporters to give credibility to both sides of an argument when one side just isn’t true.