Chris Matthews: Diplomatic Offer to Assad Must be More Than ‘You Die!’ 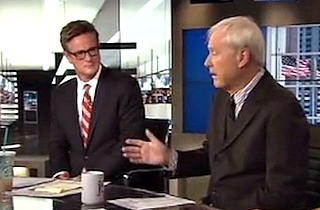 MSNBC’s Chris Matthews argued on Morning Joe Wednesday morning that in the absence of a clear military goal—or an unclear one—the United States was better off trying diplomacy to resolve the Syrian conflict, but that in order to do so President Barack Obama and the international community needed to offer Syrian President Bashar al-Assad more than his defeat as a bargaining chip.

“Would somebody please explain to me what our goal is in Syria?” Matthews asked. “Why don’t we get our head straight about what we want? We never said to Assad what we’re willing to offer him. You talk about negotiations? ‘You die!’ That’s our negotiating position. Hillary says it, Obama says it, they all say it: you have no way out. You want to negotiate with someone, you have to give the rat a hole to get through.”

“We went through this before, we very cynically let Iraq fight Iran for years,” Matthews continued, noting the refugee crisis such a strategy had induced. “So we can’t just live with the status quo. Maybe there is hope here with finding—which is what diplomacy is—finding the common interest between us and the Russians.”

Host Joe Scarborough agreed: “But before you go to the negotiating table you have to know, what’s your goal? What’s your end point? What are you going to ask others for? We don’t know. Do we want Assad to stay there? Do they want him to leave? They can’t even answer that question.”