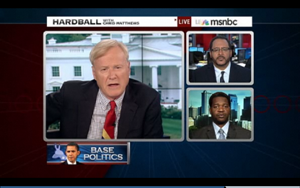 Last night on Hardball, Chris Matthews posed an interesting question: do white voters hold black politicians to a higher standard than they do white politicians? Impressing that enthusiasm for Obama has waned in the second half of his term, Matthews wondered “if this is a phenomenon … this sense of, okay, you’ve got your shot, but let’s see you do it, if it isn’t really, really good, you know, you’re out of there.” Which is really all to ask, are voters racist? And if so, could race cost Obama the re-election?

Do you have a sense as you’ve looked at politics in America that there are some white voters who will vote for an African-American say once? And they will hold that person to a very rigorous standard. Perhaps a much higher standard than they would a white politician. And they‘ll give them one shot and then they’ll dump them the next time. I look at this, I look at the Ed Brooke. I look at the senator from Illinois. I think about this…

Peterson was thoughtful in his answer, suggesting that Matttew’s question functions differently for different demographics, and that — while electoral racism is “just the way in which race and politics operates” to an extent — younger generations are making a concerted effort to push past race when casting ballots. He says:

I really have a lot of faith in young folk, across the main stream and college campuses. They were inspired by president Obama. And I really think the way we think about race, especially the way older generational folk think about race, younger generational folk are really trying to move beyond that and move past that. We’re not post-race, but there certainly is an earnest attempt by younger folk to look  at folks outside the ridged racial lines we’ve drawn for ourselves in the history of this country.

Matthew’s question has several right-leaning bloggers on the defense, but the thought that there might be an implicit racism at play in politics seems worth parsing.

In The Nation this week, Melissa Harris-Perry, a professor of political science at Tulane and sometimes MSNBC contributor, had a less optimistic take than Peterson. The piece called “Black President, Double Standard: Why White Liberals Are Abandoning Obama,” finds Harris-Perry wondering much like Matthews if the 2012 presidential election might reveal a deep seated electoral racism. “If old-fashioned electoral racism is the absolute unwillingness to vote for a black candidate,” she posits, “then liberal electoral racism is the willingness to abandon a black candidate when he is just as competent as his white predecessors.” Harris-Perry’s studies show that when he ran for Illinois Senate in 2004 and President in 2008, voters cast their ballots for Obama maybe in part because he was black, but more so because he was the candidate they most wanted to represent them. She worries, though, that this election might be different.

She is concerned that many of the complaints Obama has been made to field regarding health care reform and unemployment rates would also have been applicable to former President Bill Clinton at the end of his first term, implying that Obama is being held accountable where Clinton was not. Clinton was enthusiastically re-elected, whereas Obama has seen a decline in support amongst voters. Perry believes that “much of that decline can be attributed to their disappointment that choosing a black man for president did not prove to be salvific for them or the nation.”  If Obama loses, “it may be possible to read that result as the triumph of a more subtle form of racism.”

Read Harris-Perry’s piece here, and watch the Hardball clip below: