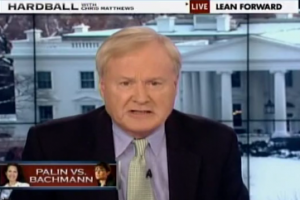 The most entertaining segment of Hardball the past few nights has been watching host Chris Matthews consistently seethe at the mere mention of the name Congresswoman Michele Bachmann. And with Sarah Palin‘s “WTF” moment, she too has re-entered Matthews’ zone of contempt, a place where Matthews seriously serves up an endless supply of eye-catching insults.

For the past few days, after a clip of Bachmann played, smoke would nearly come out of Matthews’ ears as he then proceeded to mock her as a “balloon-head,” yelled at Tea Party leaders for refusing to admit she’s ignorant, or worried she might lack the comprehension to know when she is “making an ass” out of herself. And who can forget old classics like Matthews suggesting she acts like a “zombie” and wondering if she’s persistently “hypnotized.”

In today’s clip, Matthews wonders why “know-nothings” Bachmann and Palin are so celebrated by Republicans. His guests attempt to soothe Matthews with the fact that, in their opinion, neither are serious candidates for President, and that by comparison, Bachmann and Palin make people like Mitt Romney and Tim Pawlenty look so much better. However, Matthews more accurately comes to his own conclusion, which also gives us a peek into the rationale behind his obsession with the dynamic duo: “I’m afraid [Palin and Bachmann] make [people like Romney and Pawlenty] look boring.”

Therefore, I offer up this column as a pseudo-intervention of sorts in an effort to merely draw attention to the fact that Matthews’ obsession does indeed exist, yet in my opinion, it’s not a problem that needs to be fixed. You see just like Palin and Bachmann are more exciting than most Republican candidates, Matthews, with his absurdly over-the-top rants and breathless verbal assaults, is in fact the most exciting liberal commentator who consistently attempts to trash them.

Although this is likely the subject for a different column, I personally think there is a huge difference between Palin’s entirely defensible, witty, and even inspirational “WTF” response to Obama’s State of the Union Address (yes, I’m not backing down from this), versus Bachmann’s speechifying which I consistently find similar to watching an elephant cross a frozen pond. Yet despite one’s personal preference about either woman, there is no denying that Matthews unleashing an uncensored smackdown on these women that he finds so unintelligent, might be bizarre, it might even reach levels of misogyny according to some, yet overall it makes for great television.