Chris Matthews Explains JFK’s Affairs: He Was Able To ‘Understand People’s Feelings And Not Be Moved’
Video

Chris Matthews Explains JFK’s Affairs: He Was Able To ‘Understand People’s Feelings And Not Be Moved’ 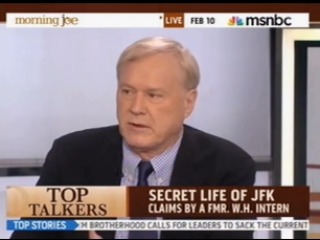 On Friday, the folks at Morning Joe invited Chris Matthews — who recently published Jack Kennedy: Elusive Hero, a book about (you guessed it!) John F. Kennedy — to the show to discuss Mimi Alford, a former White House intern who recently came forward with the story of her affair with the former President.

Joe Scarborough, for one, isn’t exactly shocked by the news that Kennedy engaged in an affair with a young press intern. He brought up two other interns — named “Fiddle and Faddle” by the secret service — and Joe Kennedy‘s rumored interest in his son’s dates.

RELATED: Joe Scarborough Calls Out Sam Stein: ‘Don’t Suggest You’re The Only One Who Gives A Damn About Women’s Health’

Matthews called JFK’s actions “indefensible” and gave us some insight into what Kennedy was like as a person:

Part of it that’s indefensible is his tone of detachment, his ability to understand the feelings of those around him, and in fact track them and manipulate them, whether it’s Curtis LeMay or it’s his wife. I mean, his amazing ability to understand people’s feelings and not be moved by them at all. I think the word that’s been used recently is “heedless.” Cold detachment.

And the other part of it is the compartmentalization of his life where he could have what seems to be — if you’ve listened to all these tapes that have come out — a full marriage. Discussions about emotions and life, the normal things that most married couples think of as marriage, that sharing of emotions and life. And, yet, having these other compartments with these other women at the same time. He was able to keep them sealed off from one another in a way that was almost inhuman.

At the end of the segment, Matthews implored viewers to buy his book instead of Alford’s.