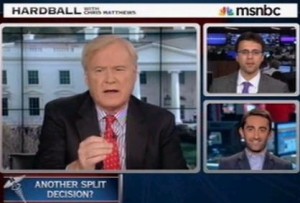 On Wednesday, Hardball host Chris Matthews and Washington Post columnist Ezra Klein discussed the potential for all or part of President Obama’s health care reform law to be ruled unconstitutional in the Supreme Court and the ways in which progressives could move forward with health care reform in a post-Affordable Care Act world. Klein confirmed conservative’s latest fear: striking down the health care law could pave the way for a single payer system that could be implemented over time through the budget reconciliation process in the Senate.

“Let’s think grandly, let’s think universal here, or cosmically. Maybe this is a break in a strange way,” said Matthews. He went on to think aloud about the President’s path towards achieving health care reform after a hypothetical ruling by the Supreme Court that strikes down the mandate.

In Matthew’s scenario, the President explains that he tried “the middle road” way but is forced to push for a single payer option along European lines because that is the only remaining constitutional venue to achieve universal health care reform.

Klein agreed with Mathews. “If the Supreme Court takes this [the individual mandate] off the table, pretty much all that is left as a way to deal with free rider problem in health care, where people come and get insurance and healthy people stay out, is some form of single payer,” said Klein.

But achieving a single payer system will be even more difficult legislatively than passing the Affordable Care Act was, which took months to negotiate and even then only passed on a straight party line vote. Kline opined that the Senate, presumably still dominated by Democrats in the 113th Congress, could gradually add more uninsured citizens to the Medicare rolls via budget reconciliation and thereby gradually introduce a “de facto single payer system.”

“Democrats who just went through this would say, ‘okay, what we do now is you begin expanding Medicare, Medicaid and the Children’s Health Insurance Program though budget reconciliation,’” said Klein. “You do that year by year—5 million people here, 10 million people here.”

Klein says that gradually, the government will be covering the vast majority of people under the rubric of the presently available government run medical assistance programs until you get to, what is for all intents and purposes, a single payer health care model.

“It’s not a great way to move forward,” Klein admits. “It’s not quick and a lot of people are going to hurt in the meantime, but in the end this could be the worst possible thing to happen to conservatives who wanted to have a free market, private sector health care system in the long run.”

Budget reconciliation is the parliamentary process by which budgetary items are passed in the Senate by a simple majority vote – Senate Democrats used reconciliation to pass the Affordable Care Act through the upper chamber after losing their super majority when Republican Sen. Scott Brown (R-MA) won a January, 2010, special election to replace the late-Sen. Ted Kennedy (D-MA).

Perhaps conservatives should be more wary of what could happen if the Supreme Court does strike down the president’s signature health care law.