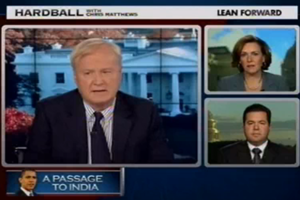 President Barack Obama is staying in India in the coming days, prompting renewed criticism on the right that this is not the right time to spend money on travel. For many, the criticism, in this economy, is justified. For others, they are partisan attacks that fail to understand the importance of diplomacy. Then there’s the “ethnic aspect” Chris Matthews finds, in which President Obama is considered “not worthy to travel.”

Matthews railed against those who object to the President’s travels, calling the criticisms “disgustingly ad hominem” and suggesting that there is an “ethnic aspect” to how the President is treated by the right:

“I’ve never heard a president attacked on the cost of his trips, like he’s not worthy to travel? Because of what? Why isn’t he worthy to make a presidential trip to one of the most important countries in the world, India? India and China are the future; if we aren’t dealing with them, I don’t know who we should be dealing with overseas, Denmark?”

His panel, Media Matters’ Ari Rabin Havt and Salon‘s Joan Walsh agreed, the former arguing that these attacks prove “right wing journalism is an oxymoron” and Walsh stating that she sees the attacks as claims that President Obama “isn’t entitled to the same type of protection or the same type of dignity” as past presidents.

Matthews also argued the attacks were put-downs to India “as a third-world country” and dismissed the complaints as “idiot high school stuff.” The segment from last night’s Hardball via MSNBC below: