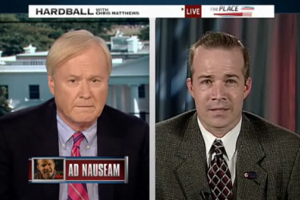 Alabama congressional candidate Rick Barber, he of “Gather Your Armies” and “Taxation is Slavery“– was a guest on Hardball tonight in an interview that can best be described as Rand Paul/Rachel Maddow Part II. Except in this version, instead of nitpicking over libertarian theory, Chris Matthews berated Barber for claiming the United States wasn’t a representative democracy while Barber mocked him for not knowing what a metaphor is.

Matthews’ approach to the interview is to take Barber through every single point made in his two YouTube ads– yes, it is as painful as it sounds. Matthews begins by asking who Barber would like to impeach when he says “I would impeach him.” Barber calls it a “metaphor to the fact that we don’t seem to want to hold our leaders accountable,” but wouldn’t say whether there were concrete illegal acts, though he hinted at tax fraud, tax evasion, and the Joe Sestak job pseudo-scandal.

Then the conversation shifted in that direction– to taxes– and became a murky swamp of income tax policy. Barber wants to replace all current taxes with a “fair tax,” which Matthews notes is not possible since the federal government can’t eliminate state taxes. “You would get rid of Social Security,” he responded, “capital gains, Medicare and Medicaid. You would get rid of the death tax.” At this point, Matthews loses his patience and repeatedly accuses him of not answering the question.

If this would have been the end of the interview, it would have been a fairly bad debut for Rick Barber in the national arena. But it wasn’t: He was then held accountable for his other ad, asked, “we don’t have a representative form of government?” He responded that “absolutely we do,” but Matthews continued, asking “why do you keep saying government is tyranny?” This goes on for a while, until Matthews rapidly switches gears, asking whether Barber has ever been audited.

The entire interview is fascinating, albeit extremely painful. In retrospect, comparing it to Maddow’s intelligent discussion with Rand Paul is doing it too much justice– it was readily apparent Matthews doesn’t have much respect for Barber at all, and Barber has a deer-in-headlights quality to him towards the end, as if he expected the interview to be easier. It’s difficult to imagine what made Barber think an interview with Chris Matthews would be a walk in the park given Matthews’– and MSNBC’s– reputation among right-wing candidates (maybe his experience with MSNBC contributor Dave Weigel on Monday?). But this isn’t the first time a pseudo-Tea Party candidate enters the fray with a liberal commentator and leaves a little scratched up, and while it may not do wonders for their campaign, the stark differences in ideas is what makes for great TV.