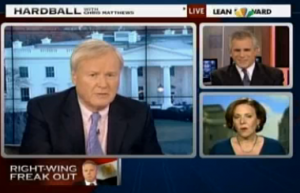 Following in the footsteps of Rachel Maddow, today Chris Matthews piled on by criticizing Glenn Beck‘s latest theories and concerns regarding what the Egyptian uprisings mean for the rest of the world. Matthews immediately dismissed Beck’s proclamations as “looney tunes,” but was eager to ask his two liberal guests what could possibly be the motive for the “right-wing freak out?”

Joan Walsh, from Salon, weighed in with her diagnosis on Beck’s rationale: “he is definitely losing his audience, he’s lost it by about a third, and he may be losing his mind.” Walsh also declared “we are watching someone kind of fall apart on television – and how much longer that’s going to go on, I think is a question.” Slightly less dramatic was David Corn from Mother Jones who compared Beck to a bad version of the star from the movie Network with extremely ridiculous conspiracy theories. Matthews summed up “Professor Beck” as someone who should be screaming “I’m crazy as hell and I’m not going to take it.”

Beck’s idea, interpreted by Matthews to mean that the American left is contributing to the Egyptian uprising in order to help bring about a “coming insurrection” is what Matthews concluded was an attempt to “distract us from any kind of serious conversation that might involve thought.” Unlike say a whole segment dedicated to determining whether a cable news competitor is emotionally stable, which is just the type of serious conversation requiring intense thought from Hardball viewers?