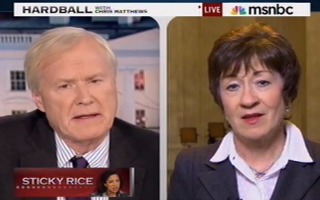 Sen. Susan Collins (R-ME) joined Chris Matthews on MSNBC’s Hardball on Wednesday where she interrogated over her statements earlier in which she objected to U.N. Ambassador Susan Rice’s potential nomination to become the next Secretary of State. She made the case as to why Rice had motivation to downplay the attack in Benghazi at the time, having been an early advocate for intervention in that country. Matthews asked her twice whether there was any truth to the administration’s story that an anti-Islamic video had caused a riot which evolved into the attack on the Benghazi consulate. Collins twice insisted that the attack was not motivated by the offensive YouTube video.

“Do you believe that Susan Rice, the U.N. Ambassador, knowingly covered up a breach of national security,” Matthews asked.

Collins answered that her only goal was to get to the bottom of what happened and when, and if possible to prevent future similar breaches of national security.

Matthews asked why Collins dismissed the recently revealed fact that national intelligence at the time of Rice’s appearance on five Sunday news programs indicated that the attack in Benghazi grew out of a spontaneous protest.

Collins replied that she was mostly bothered by the contradictory evidence that was already available to the public at the time of Rice’s September 16 appearances – including the president of Libya saying outright that the attack in Benghazi was an act of terror and they had already made arrests.

“What would be the political purpose in denying the role of terrorism in this act,” Matthews asked. Collins replied with a litany of reasons as to why Rice and the administration had motive to engage in a cover up:

I believe that the administration wanted to portray Libya as an unqualified success story. Ambassador Rice was one of the chief advocates of our involvement in Libya, so arguably had a personal stake in that as well. I think that it was contrary to the narrative of the administration to say that Libya was awash with weapons, that there was a growing Al Qaeda presence, that there were training camps for Islamic extremists – particularly near Benghazi. And that there had been 274 security incidents in just the past 13 months, five of which – I mean, one out of five, were in Benghazi, including an attempt on the life of the British ambassador.

Matthews asked if there was any role that an anti-Islamic video played in the attack on Benghazi. Collins replied that some individuals may have been motivated by it, but she had seen no evidence that it was the cause of the attack. She went further, saying that Rice’s explanation on September 16, that the video was the sole cause of the attack, was entirely inaccurate.

Matthews cited a report that suggested that some of the individuals who looted the compound amid and after the attack were motivated by the video, Collins repeated that she had seen was no evidence that the video was the cause of the attack.