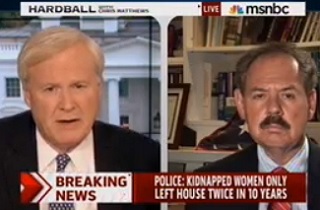 One of the big problems of the cable news era is what to do with the at times huge deficit between the public’s intense interest in a news story, and the availability of facts with which to sate that interest. That gulf is often filled by cable news experts, whose contributions can wander into Speculationville. Such was the case on Wednesday night’s Hardball, when former F.B.I. profiler and NBC News crime analyst Clint Van Zandt imagined a scenario in which rescued kidnap survivors Amanda Berry, Gina DeJesus, and Michelle Knight “chose” not to escape until this week, in order to avoid torture.

Toward the end of a series of long hits on both hours of Hardball, host Chris Matthews asked Van Zandt to explain how accused kidnapper and rapist Ariel Castro could have managed the captivity of the three women for so long.

“One of the things that we understand,” Van Zandt began, “is that the oldest victim, Michelle Knight, that she had been, according to some media reports, she had been beaten and battered, her face had been beat, she lost hearing in one ear, punched and beaten. There were some reports that he impregnated her at least five times, and made her lose all five births, that didn’t take place. She lost those children.”

He added, “If you just imagine the other two victims in this case, if they say the older one, who could have been a role model, or at least an older woman, if they see her beaten and battered with regularity, they think, ‘My God, I am not going to do anything negative, because he will do those same things to me.’ He may not have been the smartest guy on the block, he knew how to manipulate and play mind games, and how to torture these women into believing…”

Now, I realize that Van Zandt has been filling time for hours at this point, and he has to say something, but the idea that it takes some sort of psychological cunning to “manipulate” people over which you have complete physical restraint is… let’s just say he’s overthinking this. Sadism, even extremely dedicated and well-prepared sadism, doesn’t require skill or cunning.

“Chris, they had to do a cost benefit analysis,” Van Zandt continued. “Each woman had to say to herself ‘Is it worth trying to escape, based upon what he says he will do to me, and what I’ve seen him do to the other two women, or is it better to at least live, and not go through that level he have punishment, and do what I’m told?'”

He briefly qualifies his statement as expert speculation by  saying “Every captive has to go through that cost benefit analysis,” but then states, bluntly, “They did. And obviously, until early this week, they all made the decision, if they had the opportunity to run, they chose not to, until Amanda finally said, ‘No more, I’m out of here.”

This is where the host should have stepped in, as Chuck Todd did when a terrorism expert got ahead of the facts during the Boston bombing manhunt, and put the brakes on. Instead, Matthews agreed, “That must have been a heavy level of fear to bounce off the chance to get away, and it must have been horrific fear they felt, based on the evidence, and what they saw before them, of what this guy was capable of doing, and had done.”

The first problem is, of course, that there is no indication these women ever had a chance to escape, let alone passed it up. In fact, there have been reports that one of the women tried to flag someone to get help a few years ago, and police have said that the women report only having been outside twice in ten years. It’s possible that one or more of these women did attempt escape, maybe every day, maybe they strained at their ropes and chains every minute of every day. Clint Van Zandt doesn’t know any differently.

But aside from that, the language here is troubling, and even though the guy was probably tired, it’s important. Even if you grant that Van Zandt meant to disclaim his speculation as a description of a typical long-term captivity scenario, and even if you grant that the dynamic he describes is largely accurate, that some level of compliance is reached in these situations as a response to torture and terror, avoiding the risk of a possibly failed escape can hardly be described as a “choice,” or even a decision. These women had every shred of their own physical autonomy stripped away by a subhuman monster, and to suggest that they had any choice in the matter is insulting.