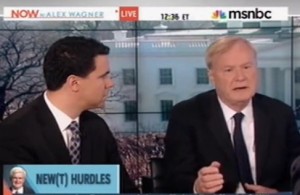 On Wednesday’s edition of Now with Alex Wagner, perpetual motion machine and Hardball host Chris Matthews showed up to liven things up. In a segment about the current slugfest between former Speaker Newt Gingrich and former Gov. Mitt Romney in Florida, Matthews (seated next to former Obama spokesman Bill Burton) called out GOP strategist Phil Musser for being a “Romney guy,” and concluded the segment by throwing host Alex Wagner off, responding to her kind outro by saying “This is how you dump guys, huh?”

Matthews started out by making the case for the “Newt Effect,” that even if Romney wins the nomination, “He will imitate Newt by the end. Your party (the GOP) is being pulled so far to the right, no matter who the nominee is, the President will be able to grab the center. Do you want to be to the right of Newt?”

Burton added “(Romney has) already found places where he’s trying do that, on the Ryan budget, with immigration, he is –”

“Round them up? Self-deportation? That’s a cartoon.” Matthews interjected.

“To pivot from, ‘We have to turn off the magnets for the illegals,'” Wagner said, “to trying to do a vague courtship of the Florida Hispanic community by saying ‘We will have self-deportation.'”

Musser pointed out that a new poll has Romney leading with Hispanic voters in south Florida by 15 points.

“Because he has leadership down there,” Matthews responded. “Guess who understands Spanish well enough to have a debate in that?”

Musser, undeterred, said “I think the Quinnipiac poll that shows it pretty close today is probably about right.”

Matthews lit into Musser. “I’m sorry, I didn’t know you were a Romney guy? i thought you were just a GOP strategist. Are you a Romney guy?”

Amid Musser’s protests, Matthews continued, “I thought we were here to analyze what we think is going to happen, not to advocate what we want to happen.”

He said this while sitting next to fellow panelist Bill Burton, who is head of the pro-Obama superPAC Priorities USA, and while Burton ostensibly doesn’t have a dog in the GOP primary fight, it wasn’t really a fair attack on Musser, who was billed as a former adviser to Tim Pawlenty’s campaign. Pawlenty, you might remember, was an early endorser of Mitt Romney, so both sides of that table were pretty clearly labeled.

Still, Matthews made a pretty convincing case for a Gingrich win. “Parties are driven by their souls in the end…Not everyone goes (into the voting booth) strategically, they go in with gut anger and they have strong feelings with the candidate that is like them. Newt is more like a Republican voter.”

That Quinnipiac poll notwithstanding, Romney is in real trouble in Florida, and while polling is closer nationally, the wind is at Newt Gingrich’s back.

Alex Wagner wrapped up the segment with some effusive praise for Matthews. “Chris Matthews, always distilling it into a nugget of wisdom.  taking it to a different level. Thank you for your wisdom and intelligence and savoir faire. It’s an honor to be on set with you, sir. Thank you for joining us.”

“This is how you dump guys, huh?” Matthews joked, then took another shot at Musser over Wagner’s laughing protests. Pointing at each of his fellow panelists, Matthews said, “This guy is smart, This guy is smart, and this guy is a flack for Romney!”‘