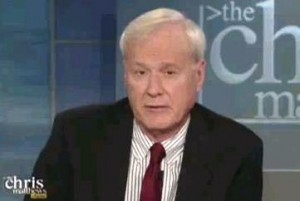 If there’s one person who can always be trusted to delicately handle the subject of President Obama‘s race, it’s Chris Matthews. And on his show today, he proved how nuanced and restrained he can be on this topic by saying that in 2008, Obama was positioning himself as more of a white candidate with references to his immigrant roots, and how that meant he was walking back being “black” in that race.

RELATED: Matthews on Obama: ‘I Forgot He Was Black For an Hour’ (UPDATED)

The subject of the segment was how Obama’s racial identity has shaped his personal and political life. The Washington Post‘s David Maraniss explained that since Obama is only half-white and half-black, white America just really wants to know why he identifies as black. Matthews helpfully observed that throughout American history, “if you’re one drop black, you’ll become black.”

Matthews highlighted a section in Maraniss’ book about the president where Obama once told an old girlfriend he was “an imposter” because while identifying as black, “he was so white [and] there was hardly a black bone in his body.” Maraniss explained when Obama was in New York for a few years, he really didn’t make any black friends. Matthews then turned to the 2008 election and how Obama seemingly did sort of a racial double-take in that race.

“He did another sort of a walk-back, because he ran not just an African-American, but as a sort of a guy, the son of immigrants. Very much like our backgrounds, you know, white people’s backgrounds.”