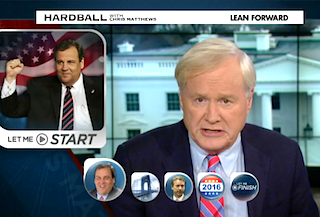 It’s been a little more than six months since MSNBC’s Hardball with Chris Matthews started airing its first-run show at 7 p.m. ET weeknights (as opposed to the 5pm live, 7pm rerun schedule the network ran previously). While there were signs that the change was paying off for MSNBC as early as November, Chris Matthews solidified his success last week by winning his time slot in the 25-54 demo over Fox’s On the Record with Greta Van Susteren.

With an average 285K viewers in the 25-54 demo for the week of February 3-7, Matthews came out ahead of Greta Van Susteren, who averaged 282K. It was the first time MSNBC was #1 in the demo for the week since September 2012, when the network was covering the Democratic National Convention. Van Susteren, who herself moved from 10 to 7 p.m. late last year, maintained her sizable lead in total viewers.

Of all the MSNBC hosts, perhaps none have been covering the New Jersey Governor Chris Christie “Bridgegate” scandal as doggedly as Matthews, who has spent multiple segments per night on the story since it first broke wide last month.

The Christie news has helped boost MSNBC in other areas as well. On the night of January 9th, MSNBC had its first overall prime time demo victory over Fox in more than year. That just happened to be the same day Christie delivered his marathon press conference in which he denied involvement in the lane closures leading up to the George Washington Bridge. That same week, MSNBC’s Rachel Maddow beat Megyn Kelly in the demo for the first time since they started airing opposite each other last fall.