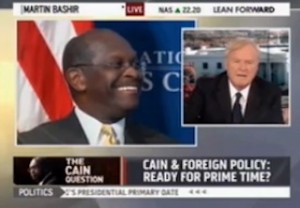 Where policy is concerned, asked Bashir, “is Herman Cain a serious candidate for president?” Matthews’ response was simple, and blunt:

No. And the reason he’s not is he is not prepared even to the point of being a newspaper reader. I can tell — we all can — when someone is unfamiliar with a term like “neoconservative,” which has been at the heart of the whole debate over the war with Iraq, with of course the neoconservatives fighting very hard to wage that war and others opposed to them for that reason.

To not know that the Chinese have had, the PRC has had nuclear weaponry since the 60s is ignorance. These are facts of our fundamental national and international situation.

Bashir followed up by asking whether it’s become “hip to be dumb,” with Matthews nodding that, yes, it certainly is, and that Sarah Palin looks downright genius when compared to Cain. (For those of you who are busy being very hip: Chris Matthews doesn’t view Palin as one of our nation’s most brilliant minds.)

Matthews added that, while he encourages rhetoric meant to take elitist attitudes to task, he can’t support anti-intellectualism or anti-academic prejudice.

Have a look at their discussion, from MSNBC:

RELATED: Herman Cain Seems To Reveal That He Was Unaware Of China’s Nuclear Capability