Chris Matthews Hits ‘Policemen’ Foreign Policy: I Voted For Bush In 2000 Because He Wanted ‘Humility’
video

Chris Matthews Hits ‘Policemen’ Foreign Policy: I Voted For Bush In 2000 Because He Wanted ‘Humility’ 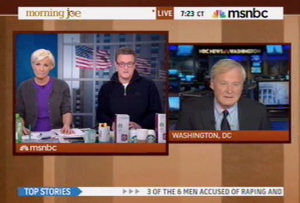 Appearing on Morning Joe on Wednesday, MSNBC host Chris Matthews was critical of the United States’ foreign policy. Noting that he voted for President George W. Bush in 2000, Matthews argued against America’s “policeman” role in the world.

Introducing the issue of foreign policy, Joe Scarborough noted that the debate surrounding Chuck Hagel gives Republicans who believe in a more restrained foreign policy “a person we can wrangle around and defend in support of limited military adventurism.”

Matthews agreed. “I voted for Bush, one of the reasons I voted for Bush — first time in my life I voted Republican for president and maybe the last time for a while — is because he said we want humility in our foreign policy,” he said.

“That struck a chord with me,” Matthews continued. “We’ve been trying to be the world policemen, we’re hated in so many parts of the world, just because we’re there.”

He went on to point to Hagel’s comments wherein he said the U.S. should not be a continuing occupying force in the world. Some people believe we should be just that, Matthews argued. While others think “wait a minute,” and say, “All we do is kill Arabs on international television every night, and Islamic people. We’re just getting hated and hated and hated. What’s the point? Are we really gaining anything?”

That, he asserted, is going to be the debate.