Chris Matthews: I Could Argue That The Media ‘Leans A Little To The Left’
Video

Chris Matthews: I Could Argue That The Media ‘Leans A Little To The Left’ 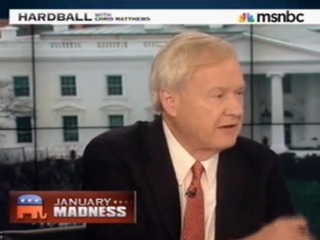 On Friday’s episode of Hardball, host Chris Matthews gave something of a needle-scratch moment when he noted that the American media tends to “lean a little to the left.”

Matthews and his panel were discussing what the future holds for Mitt Romney, with guest John Heilemann weighing in on Romney’s strategy for Iowa. “If you go out there as the frontrunner,” he said, “and now you’re playing in Iowa, I think the national media narrative is going to quickly become ‘Is Mitt Romney making the same mistake as he made in 2008 when he tried to do the same strategy – win Iowa, win New Hampshire, put the race away?'”

He added that it would be difficult for Romney’s campaign to “lower expectations the way they think he can.”

Matthews was inclined to agree:

And that’s what we call a dynamic. He goes in there and says, “I’m running, I can win,” and because we know he doesn’t take chances, the national media, which leans a little to the left I could argue, could smash him.

RELATED: Chris Matthews Reveals He Has Turned Down Two Offers To Work At Fox News…10 Years Ago

Now remember, Matthews is a guy who had been courted by Roger Ailes to join Fox News (which, for those of you who tend to dwell underneath rocks or on other planets, is decidedly not a left-leaning media enterprise), and who has faced criticism for, at times, taking the Right’s point of view when it comes to certain discussions. So it shouldn’t be all that surprising that, out of all pundits who lean left of center on a network that leans left forward, such an opinion would come from Matthews.

Have a look at what happened, via MSNBC: