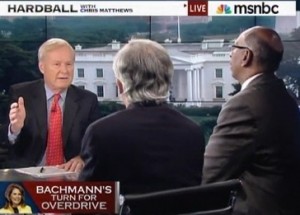 After playing a clip of Schieffer getting Bachmann to admit she regrets some of her statements about Obama, Steele quickly responded, “I wish he would [be that aggressive] when he has the President sitting in front of him.” Matthews laughed loudly at Steele’s implication and exclaimed “you think Schieffer’s a liberal!” Then Matthews introduced a clip from Bachmann’s appearance with Wallace, sarcastically referring to Fox News Sunday as the “well-known retreat for lefties.” Regarding the controversial “are you a flake” question posed by Wallace to Bachmann, Matthews suggested “I’m not sure I would put the question that way,” but given his knowledge of Bachmann, he concluded “I think [Wallace] hurt her feelings there, a very human moment there.”

The conversation quickly spun into a loud debate about whether or not denying global warming is a “flaky” statement, yet flake or not, Matthews seems to continue to be more impressed by Bachmann than with the other Republican frontrunner, Mitt Romney. Even though later in the show Matthews describes the choice between Romney and Bachmann as “pick your poison,” he still maintains about Bachmann, “whatever she says, she believes. That separates her from Romney and some of these other guys who just want to look good.”