Chris Matthews: ‘I’m Not A Bush Hater’ But Bush’s Attitude Towards Bin Laden Was ‘Wise-Ass’ 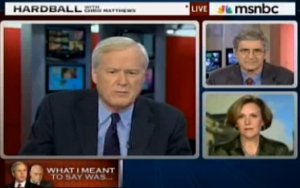 Chris Matthews continued the celebration of Osama bin Laden‘s demise by recalling how wrong many Republicans turned out to be when speaking about foreign policy. In retrospect, Republican Senator John McCain looked particularly foolish saying it would be naive for then presidential candidate Barack Obama to say he would go into Pakistan to get Bin Laden. Yet Matthews and guest Joan Walsh saved their harshest criticism for former President George W. Bush.

After showing clips of Bush, while he was President, say he doesn’t spend much time thinking about Bin Laden, Matthews concluded:

“I’m not a Bush hater, but that was wise-ass behavior there. Just wise-ass. I mean this is the rich kid acting like I don’t care about that old girlfriend that dumped me. That was behavioral weirdness right there.”

Walsh agreed, suggesting she found it especially difficult to hear Bush’s chuckle from the clip. Yet Walsh theorized there actually was a plan behind Bush’s eagerness to steer the conversation away from Bin Laden:

“They were making the case – they decided it was bigger than Bin Laden – they were going to blame the whole thing on Iraq and lie about it. . . . He was laying the groundwork to shift the focus from Bin Laden as the mastermind and the bad guy to Saddam Hussein and Iraq.”

Following some more speculation, including Matthews claiming Bush may have prioritized Iraq in order to get revenge from Saddam Hussein for his father, Matthews then simply summed up his thoughts about Bush’s attitude towards Bin Laden: “what an asinine comment!”