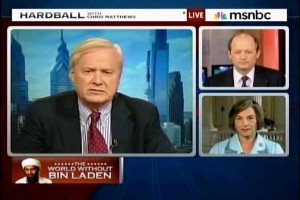 Today on Hardball, Chris Matthews was discussing the Osama bin Laden death photos with NBC News’ Michael Sheehan as well as Rep. Jan Schakowsky, one of the “lucky” few who’s been invited by the White House to view the pictures. Schakowsky agreed with the administration that the pictures should not be released which led to Matthews asking why Republicans were pushing so hard for them to be. He wondered aloud if, perhaps, the Republicans were actively trying to “incite more trouble.”

Citing both the trouble caused by Pastor Walrus-Face as well as the murder of Dutch filmmaker Theo van Gogh, Matthews phrased the question thusly:

Really? Matthews can’t think of a single reason the Right is pushing this besides the idea that they actually want more people to get murdered in the Middle East? How about the simple explanation that, by keeping this debate in the forefront, it distracts from Barack Obama’s accomplishment. I mean, that’s pretty obvious. Can Matthews really not see that. It’s almost as if-

Wait a second. Matthews is speculating about a shadowy group secretly trying to drive the world into chaos for their own gain…I’ve got it!