Chris Matthews Isn’t Sure About Obama’s Bus Tour: ‘Doesn’t Seem To Be The Right Move’ 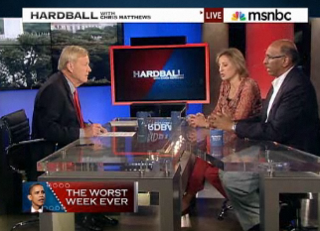 With Congress out of session and half a month of little to do before him, President Obama is going on a bus tour across America to meet with people and discuss the important economic troubles the nation has ahead. While he isn’t the first or last executive (or wannabe executive) to do so, Chris Matthews hesitated to support the move today, suggesting that a tour without a plan didn’t make much political sense and rounding off his doubts with what could be the worst political insult possibly in August 2011: “It seems like something Tim Pawlenty would’ve done.”

Matthews discussed the tour with guests Michael Steele and Dee Dee Myers, of which only the latter seemed to think the tour was a good idea. Matthews argued that the bus tour was a good idea for a presidential candidate– or even someone of the political position of Sarah Palin, but “someone who has been President of the United States for three years? To go listen to people?” Steele agreed that “this doesn’t get him where he needs to be,” particularly because he is not presenting a plan for the economy.

“I think it would be better if he had a proposal he had to sell,” Myers countered, but added that getting out and talking to people was never bad for approval ratings as it made him approachable. Steele argued it was symptomatic of a bigger problem– “he thinks he can still convince you with a good speech… with someone like Perry getting into this race, he’s going to have to get him game on.” Both Myers and Matthews agreed on that point, particularly because the Republicans were campaigning in a way in which they didn’t quite battle each other, but were all chipping away at President Obama.