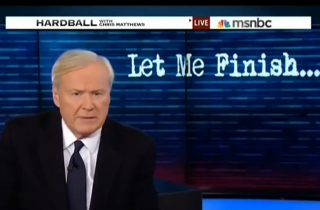 In a Thursday evening clip first flagged by conservative media watchdog NewsBusters, Matthews concluded his show with a monologue suggesting, for perhaps the hundredth time, that the GOP’s continually negative treatment of the Democratic president is rooted ever-so-subtly in race.

“Some day years from now people will look back on this presidency and see it in sharper contrast,” Matthews began. “They will read how it started with the Republican Senate leader calling for the president’s defeat, declaring that the business of the opposition from the first day was to ensure the new president, A) accomplishes nothing; and B) gets booted from office as quickly as possible.”

He rattled off a series of examples from Rep. Joe Wilson‘s famous “You lie!” SOTU outburst, to Speaker Boehner’s invitation for Israeli PM Benjamin Netanyahu to speak before Congress, to Sen. Tom Cotton‘s letter with 46 other Republicans speaking out to Iranian hardliners against the president’s nuclear deal.

“They will read all this and wonder what was it that made this Republican opposition so all out contemptuous of an American president?” the MSNBC host asked. “What made it treat him as below respect, below the dignity historically accorded his office?”

His conclusion: “They will then look at a picture of this president, a picture of this man, and perhaps get the idea that the age of Jim Crow managed to find a new habitat in the early 21st century Republican Party.”