Chris Matthews Jokes About ‘Killing O’Reilly,’ Is Serious About Reagan Being Better Than Obama

Chris Matthews Jokes About ‘Killing O’Reilly,’ Is Serious About Reagan Being Better Than Obama 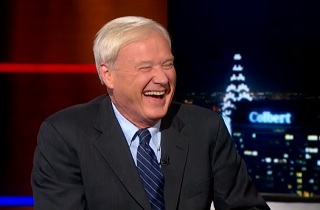 Chris Matthews, host of MSNBC’s Hardball and author of the new book Tip and the Gipper: When Politics Worked, took a shot at Fox News host and fellow author Bill O’Reilly during a Colbert Report appearance Wednesday night to promote his own book. Matthews told host Stephen Colbert that the book everyone’s really waiting for is Killing O’Reilly, while metaphorically Killing Obama by declaring that “in the end,” Ronald Reagan was a better president than Barack Obama.

Amid their discussion of the current government shutdown/default crisis, and how it relates to Matthews’ cherished time as an aide to Tip O’Neill, Colbert asked “Why didn’t you call it Killing Tip and the Gipper?”

“When are we going to have the book we’ve been waiting for, Killing O’Reilly?” Matthews joked.

“I’m not saying it wouldn’t be a big seller,” Colbert replied, “but it might be a little cry for help.”

Jon Stewart made essentially the same joke during an interview with Bill O’Reilly on Monday night, but both men were beaten to the punch by internet commenters, the website The Spoof, and military hero Capt. Koodeye B. Moore-Obvious (also a former Chairman of the Joint Chiefs of Laff).

Colbert also asked Matthews if President Reagan would ever have found himself in the current state of impasse.

“No,” Matthews replied, “because he had a strength others didn’t have. He can scare the hell out of people.”

Colbert went on to ask “You think Reagan was a better president than Obama is?”

“In the end, yeah, in the end,” Matthews replied, which should be news to those who were under the impression that President Obama still had several years to go in his second term.

“Because he ended the Cold War,” Matthews explained. “That’s hard to beat. Hard to beat that baby.”

Matthews’ response is consistent with the premise of his book, that “politics worked” during the Reagan/O’Neill era, without spelling out whom, exactly, it worked for. Because of the current crop of intransigent Republicans, Reagan has begun to be idealized even by Democrats, including Barack Obama, but his presidency left toxic legacies at every level. Part of that legacy is the current media obsession with deal-making, regardless of whether it’s a good deal, or for whom it’s a good deal. The Reagan years were probably not much of a hardship for Chris Matthews, but they were for millions of Americans.

It’s also a safe bet that Chris Matthews has pretty good health insurance, so President Obama’s most monumental achievement, the one that’s under attack right now, doesn’t touch his imagination the way the inevitable collapse of the Soviet Union did. But President Obama is still alive, and can still achieve things in the next few years, in addition to the two hot wars he has ended, and the one cold stiff he sent to the bottom of the ocean. Maybe Matthews ought to let things play out a bit before he passes judgment on the Obama legacy.

Here’s the full interview, from The Colbert Report on Comedy Central: