Chris Matthews: Like Indian Computer Techs, GOP Is ‘Outsourcing’ Election ‘To A Mormon’ 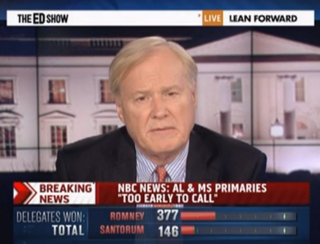 A poll conducted this week in anticipation of today’s Alabama and Mississippi primaries found some data show that a shocking number of people in both states believed President Obama was a Muslim. This poll concerned Chris Matthews tonight significantly, since it seemed to him to feed Republican support for Mitt Romney despite him being Mormon. To Matthews, Romney was like an Indian (“or somewhere in the Third World”) computer scientist fixing your computer: “you don’t care who is fixing it, just fix the damn computer!”

Ed Schultz asked Matthews whether he thought the region was “going to be rough terrain for Mitt Romney,” which Matthews thought it would be because “religion matters.” “The way the people in these polls down there has said that the President is a Muslim,” he argued “…culturally, they’re out to lunch for the President.” That leaves “three cultists,” he argued, and “they’re willing to outsource it to a Mormon.” He continued:

It seems to me if they can win– it’s almost like calling up India or somewhere in the third world to get your computer fixed, you don’t care whose fixing it, just fix the damn computer. They want to get rid of Obama, so they’re willing to vote for a guy they don’t like and probably wouldn’t trust his religion.

He went on to make the point about “three cultists” running– two Catholics and a Mormon– and remarking, “what a strange stew of religious prejudices at work!” Schultz suggested the prejudice was a direct product of talk radio, to which Al Sharpton agreed. “They have heard this drumbeat over and over again that he is a Muslim,” he argued, and it overrode the fact that, in 2008, “the controversy was over his Christian pastor in a white denomination.”