Chris Matthews On GOP Obama Conspiracies: ‘It’s Almost Like An Addiction To Being Afraid’
video

Chris Matthews On GOP Obama Conspiracies: ‘It’s Almost Like An Addiction To Being Afraid’ 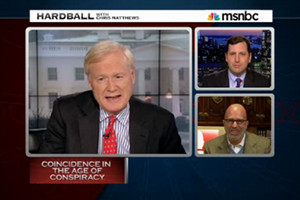 Fairleigh Dickinson University recently released results of a poll that, depending on your political persuasion, may or may not surprise you: many people, whether Democrat or Republican, love them some conspiracy theories. Results included: 64 percent of Republicans polled believe Barack Obama is hiding important information about his background and early life, 37 percent of Democrats believe it’s likely George W. Bush supporters committed some form of voter fraud to win Ohio in 2004, nearly same percentage of Republicans (36 percent) believe Obama supporters did the same to prevail in 2012, and 36 percent of Democrats are 9/11 truthers.

Doesn’t look like much difference between the parties. The difference, as it turned out: Republicans who knew more about the news were more likely to believe conspiracy theories, while the same wasn’t true of Democrats. To attempt to explain why, Chris Matthews brought Fairleigh Dickinson professor Dan Cassino, who conducted the poll, and radio host Michael Smerconish onto Hardball to talk it out. Hint: they’re pretty sure Fox News and talk radio have something to do with it.

Smerconish (a former Republican, you’ll remember) certainly seemed to think so, calling right-wing media “masters at taking kernels of truth and wrapping them in tremendous fiction,” and Matthews clearly agreed (“It’s almost an addiction to being afraid”). Smerconish also derided the lack of accountability present for those same talk-radio-and-TV media forces, though since Fox News’s ratings did slip, however slightly, post-election, perhaps they’re a bit more vulnerable than he made them out to be.

The three also discussed the fact that the poll showed African-Americans were more likely to believe conspiracy theories, with Cassino and Matthews essentially agreeing that the further removed from the centers of power one feels, the more likely one is to believe conspiracy theories. (If one wants to draw parallels between this feeling of being disenfranchised with the common complaints over “liberal media bias” that unites many conservatives, we’re not stopping you, and perhaps Cassino did just this when he said, “African-Americans are to the Democratic party what essentially the entire Republican party is to the Republican party.”)

But as Cassino said, the belief in conspiracies – which, again, spanned both parties, even if the mechanisms behind how it did were different – speaks to an echo-chamber effect on both sides: “Democrats tend to congregate with Democrats, Republicans tend to congregate with Republicans.” People on one side of an issue, either all agreeing with one another or shouting down anyone who doesn’t – can anyone think of some TV news channels where that might happen? Video of the entire clip below, via MSNBC. One thing we can hopefully all agree on: Chris Matthews saying “brain soup” is creepy.