Chris Matthews: Obama Is POTUS Because He Put ‘Cojones On The Line’ Against ‘Stupid-A** War’ 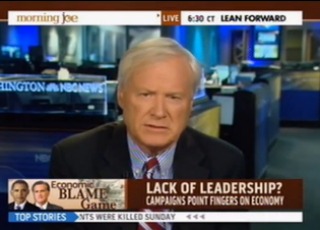 MSNBC’s Chris Matthews joined his Morning Joe colleagues on Monday, sharing his take on how President Barack Obama and his re-election campaign should proceed going forward in this election.

“What is it about this President,” asked host Joe Scarborough, “that seemed to think so big four years ago, that today seems incapable of carrying out the type of strategy that Harry Truman carried out in 1948, a guy who was back to the wall, a guy who was considered a loser, a guy who was going to be sent home to Missouri? He railed against the Do Nothing Congress, and he won. Why doesn’t it seem that the President is able to fight in that style?

RELATED: Matthews: Is The Economy So Bad ‘Not Particularly Well-Liked’ Romney Could Beat Obama?

After offering some specific advice on what policies the President could promote or improve upon, Matthews opined that the President would do well to cut it out with the “Mickey Mouse stuff” like dinners with celebrities:

[T]he President ought to be out there saying, “I’m first. Put me down for it. I’m John Hancock. I’m signing on,” and lead the way on debt reduction, long-term, short-term job creation. Everybody knows what they want done. They want jobs, now, long-term debt reduction. I think they go hand in hand.

And the President is out there talking to these rah-rah, talking to these movie stars talking about you have dinner with Michelle and the President. What’s this Mickey Mouse stuff? Who’s going to vote for a guy for that reason? Gee whiz, I have a one chance in a million to have dinner with the President. That affects my enthusiasm? No. Enthusiasm comes from leadership. He stuck his neck out. He put them on the line when he came out against the Iraq war as a young guy. That’s why he’s president. Somebody should remind him: “You know why you’re president? Because Hillary didn’t do it, and you did. And that’s what got you the presidency. You stuck your cojones on the line and said ‘I’m against this stupid-ass war.'” And that’s why he’s president. Not because he was careful.