Matthews: Obama ‘Shouldn’t Have Gone On National TV To Give A Political Address’ 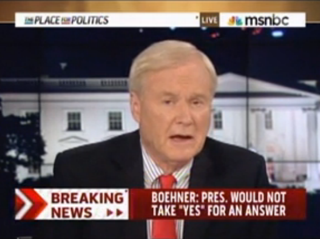 It didn’t take long for the reviews to start coming in, and at least one MSNBC anchor wasn’t too happy with President Obama’s performance during his debt speech tonight. In the post-game analysis hosted by Lawrence O’Donnell, Chris Matthews argued that he considered using primetime television space for a political debate a bit of an error, and after going into detail on how the aesthetics of Speaker John Boehner‘s speech were off, lamented that President Obama had gone on TV to give that sort of speech.

Prompted by O’Donnell’s question about the President’s decision to use primetime space for what he admitted was a debate and not a new development, Matthews noted that “there’s some concern in the media, our media, about that,” because the President “openly stated that this is a debate” and by Republicans being given a direct response, “it did put the President almost on an equal level.” He did praise the media for giving both sides equal time, however, and spent a good deal of time explaining how the Republican response was not particularly top notch the way the President’s was simply by virtue of being a White House speech. “This was another one of those slingshot operations by Republicans,” Matthews quipped, joking that Speaker Boehner was looking off into the distance instead of into the camera. Then he gave this extensive analysis of the power a good old fashioned desk can give a speech:

“It clearly wasn’t the normal sort of presentation where you look at the camera. And, by the way, I still don’t know why they keep imitating the President by putting a podium up, a lectern, acting like they’re addressing the nation like they’re the President. You’d be far better off doing what Nixon did years ago with the Checkers speech— just stand in front of a desk like an average person, lean against– put his butt against the front of the desk and talk like a regular person to other regular people. But they keep pretending they’re some sort of counter bully pulpit, when they’re not that.”